(The putting to death to the twisted souls
the Duke had changed with his evil power.)

In the caves, slaves in chains, no release,
From the Duke and his power
Haunting sight, mesmerized, bastardized,
Get ready the pyres
Staring eyes, victimized, hypnotized
All out of their minds
Find the all, hark the call, till their souls
Are cleansed by our fire

Hopeless ones, they were wronged, it's to be,
A murdering night
Quell the pain, the mad insane, you know they feel
No wrong and no right
Steel your heart, to tear apart, devils work
No mercy for life
Pleading hads, let nothing stand, hunt them down,
Grind their ashes to dust
photo 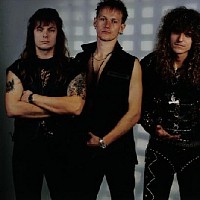